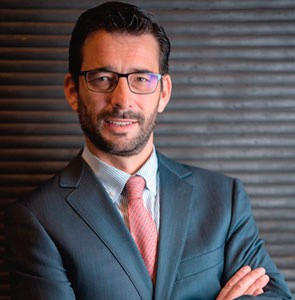 Admissions:
Practising Member of the Madrid and Cáceres Bar Associations

With more than twenty years of uninterrupted practice of law, Juan Manuel has directed a large number of judicial processes in the field of commercial and civil law. He was the director of the civil judicial process in Spain in 2006 in the context of contractual breach and infringement of industrial property rights. In 1997 he intervened in the second judicial proceeding developed in Spain for Unfair Competition in the context of disputes between legal studies by end clients. He has accumulated extensive experience in matters of Corporate Administrator Responsibility both at the procedural level and as preventive advice to organic and managerial positions.

civil and commercial contracting. With regular presence in Italy where he actively collaborates with the Fiat Lux Legal office in Rome, he participates with said legal study both in the direction of the legal interests of common clients and in lectures and publications related to updates in comparative law.

He has developed specific teaching collaborations at the Instituto de Empresa and at the University of Comillas – ICADE.

Having been a member of the National Association of Health Law, he accumulates extensive experience in forensic in litigation on medical civil liability, has participated in information sessions at the College of Physicians of Cáceres and has drawn up Informed Consents in different medical specialties for private clinics.

He advises and represents different artists and professional athletes, as well as companies and entities in these sectors.

Since 2016 he has advised companies dedicated to the development of renewable energies with projects in Europe and South America and has been selected to integrate the Zurbano + Caracas office in the international movement B-Corp that brings together companies and entrepreneurs committed to social and environmental ethics, transparency and accountability.

He is a “Voluntary Legal Advisor” of NUPA (Association for Aid to Children with Multivisceral Transplantation and Those Affected by Intestinal Failure and Parenteral Nutrition) and in “Amiga Voice” of THRibune Tribune for Human Rights, an international NGO whose purpose is focused on the defense of Human Rights.